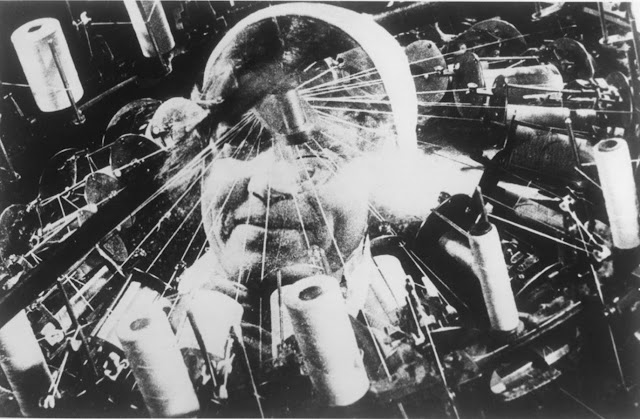 No titles, no story, no “theater”: Man with a Movie Camera announces from the start its explicit intent to separate film from both stage and page. The Man climbs atop a giant camera, the theater seats lower on their own, inviting the audience, as the orchestra plays and the spark grows within the projector like a small sun.

And day, as it will, breaks; and the camera, shyly at first, approaches through her window a woman asleep, gazes at her white neck, then jumps to the street, where others sleep on benches—and the nursery, and open, blank windows waiting to breathe. It’s all stillness and anticipation—then waking life in all its everyday glory.

Vertov invents an instant cinema university, where the film itself is the professor, and our watching is the only common text. From sleep to raucous life, from work to play, from the moment before to every moment afterward, the day passes—actually, the camera passes over the day, each new scene mysteriously linked to the previous, anticipating the next: A posted advertisement stands, the woman-figure pressing finger to lips, shushing us as the day waits—then a quick cut as the Man goes to the train tracks, aims his camera low, socks us with speed and sudden arrival—and jumps to a woman dressing, an ordinary business juxtaposed with the speeding locomotive, the worker awakened by the presence of the camera, the Man’s hand cranking the machine, intruding on—no, involving itself in—the approaching, moving day—everything moving, everything a movie.

And of course (and how fortunate for the viewer), Vertov lies to us: the theater does enter, the page turns, and a story emerges; but perhaps he has kept his word: If it is a story, it’s one the camera invents—or does it merely watch, transforming the everyday into the dramatic? Is this a film-as-textbook (so often, we see the Man set up the camera, then see what the camera sees) or the ascendancy of Watching—the human eye reflected in the camera lens, the two of them getting along at last, until we can't tell where one ends and the other commences?

All I know is, the mundane is made impossible here, as the camera edits life to its own end—while simultaneously deferring to life, watching only what it offers—but also implying meaning to life, with every juxtaposition, every sequence of shots, from languorous to frenetic, either worm’s-eye-view or bird’s—until it’s all Cinema, neither one predator nor prey, but merely strolling with the Man with his movie camera through a new world, framed and pasted in camera-tricked, cock-eyed, determined linear exposition, the smallest details of motion, commerce, transportation, and stillness not left behind but joining the procession, like the frames of a reel of film.
Email Post