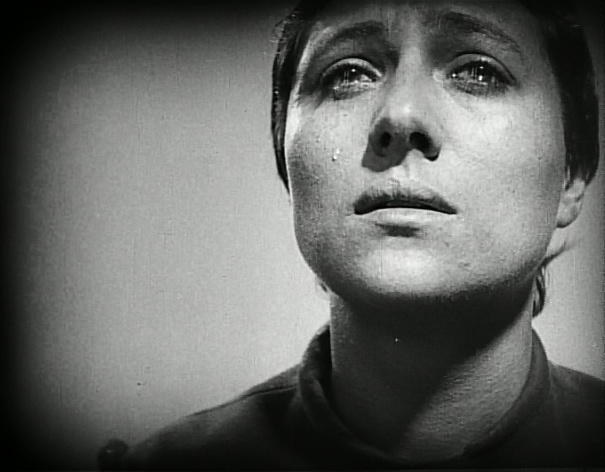 There's no more silence at the movies--and I mean the kind I could bring in with me, the audience muted, the music faded like upper-room wallpaper, its tone a memory. But no: Dreyer's Joan of Arc in her silence cries, and fills my ears with unwanted pain, until I cry with her.

I must be getting old. I look for any opportunity to laugh, forcing it sometimes, coaxing whatever shadow of joy we're allowed, and grateful when it comes, reminding me of why I'm here--you know, alive, year after year--and the need to keep on. But I am surprised by sorrow--like Wordsworth, no matter how he starts: He knows the loss, and is troubled not only because he remembers that loss but because he has forgotten it. And Joan is such a surprise, her face so close, as we, Inquisitors all, look down--while she looks up, past us, to the pale sky, her bright eyes always streaming with tears, her face composing her own requiem.

It was, if I can put it this way, a moment of cinematic transubstantiation, the film at once an object and a life, consumed but still intact--and holding me together, who pleads innocence but is willing to take the blame, if that will help her--the young girl, the flat and still image, both things at once--until I turn away and return to the street, the sky out there also pale.
Email Post