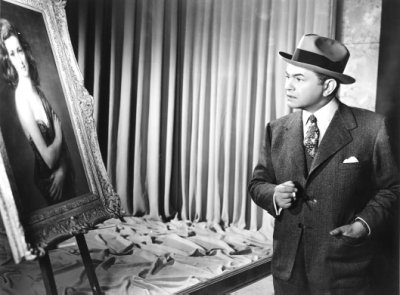 Fritz Lang runs ragged Edward G. Robinson's professor in The Woman in the Window, forcing him through his own Freudian sex-and-murder meat grinder—the woman in the portrait come to life—Joan Bennett's party-girl Galatea for the hard boiled set—while the police scrape at every fingernail for clues and Dan Duryea weasels around.

Robinson is uncomfortably convincing in the anxious unraveling of his life—that one little slip, a chance to have a real looker look back, until he's just one of the fellows at the club—but with a bloody scissors in his hand, the world finally slipping into silence as we join him in sleeping-powder suicide. And Lang is devilishly good at making us see chaos loom, all lines slanting down, all light descending—but, despite the mirror-tricks and shadow-play, the whole thing left me cold. I don't mind the old trapped-rat routine, but I wish the picture didn't decide at the last minute it was going to play cute.
Email Post