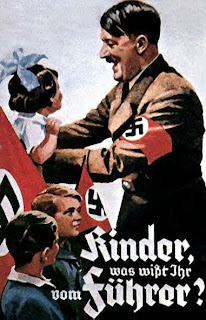 I'm listening to "Three Little Words"—Benny Goodman, maybe—and I'm sure they're not Tomorrow, the World! But the Junior Nazi in the movie does—he even lifts his crazy eyes skyward to pronounce them, his mouth in a ragged grin like Gwynplaine, the Man Who Laughs, little-boy teeth all which-a-way, Hitler somewhere off in his head, beating him until he learns to like it. It is, in short, a rough ride. Skip Homeier reprises his Broadway role as Emil Bruckner, the Hitler Youth pummeled from every side: his schoolmates (especially a bare-knuckled Pole with a second-hand grudge), his teacher, his adoptive father (Fredric March, taking it all in stride until he starts strangling Emil); but the real beating is delivered by Emil himself, stridently asserting his Master Race until he becomes the degenerate, lying and stealing, scrawling obscenities on the sidewalk, striking the gee-whiz little girl with a poker. All in the service of taking him straight down into himself, so he can hate then pity the thing he's become.

The War, it seems, is getting ready to grind toward Allied victory (I'm filled with stunned relief; could've sworn it was going to drag on until we'd all become soldiers, grim in our final careers) and Tomorrow, the World! wants us to get ready for all those would-be, has-been Nazis, with nothing to stand for except themselves. The movie may be a bit too earnest in its assertions of Main St.'s ability to find the right folk to do the job, and too ready to treat Nazism as a mental illness—but maybe they're right: Maybe something got into them, those philosophical Germans, suckers of their own publicity, eager to obey a real winner at any cost, as long as everyone would just stop staring at them, look away, and let them talk themselves into their shining, monumental tombs.
But it doesn't work that way: They will have to live, and live with themselves—oh, all of us are going to have to do that, in the new day that will follow the end of the war, with stormy weather rushing the sunshine. The radio's moved on to "Nobody"—and damned if it doesn't fit poor little evil Emil:
I ain't never done nothin' to nobody
I ain't never got nothin' from nobody, no time
And until I get something from somebody, sometime
I don't intend to do nothin' for nobody, no time.
And I'll confess I found myself in fatherly tears at the end, Emil at last a small boy, alone in the dark and hoping someone safe will take his hand.
Email Post