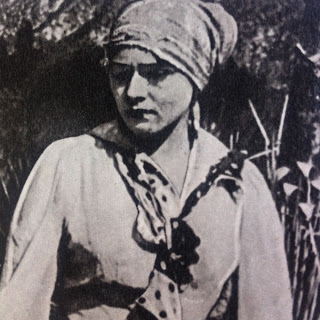 "Psychological," certainly—but perhaps closer to delirium. I haven't seen much of magician Méliès lately—but still he flies invisibly within the cinema, given the strange turns it's been making, wide and veering curves—as here in The Female of the Species: into the desert, with palms and scrub and spiky fronds, the characters (survivors of an abandoned mining camp) standing like Selenites on this alien landscape, their passions high but motives obscure.

"Man's dominant vagary" seems to be the theme—but I'm baffled by the narrative, and hold the phrase suspiciously, and with no little discomfort, as though it were an oily toad I must convince myself to kiss. The three women are jealous, a husband is killed, suspicions mount. Somewhere in all this is a plot, built on intimations and misunderstandings—and urges, many urges. Toward what? They wander, "half mad with lonely brooding"—now there's a phrase whose sentiments I can share from the relative safety of my seat. The wind blows, there are sudden attacks—as the women stagger into the frame like ghosts, and the camera cuts urgently from the crying baby to the crazed women—until it drives them together, framed by dust and the barren expanse, a dream-family of three women and the infant, wandering with secret joy into a wilderness of "purple sage."

I have little to add. In its way, this is the most remarkable film I've ever seen. Over the years some have extolled the cinema as A New Art; but I don't think we've grasped exactly the perils it might entail. The Female of the Species seems to know better than many of us—but it sidles past with furtive glance, whispering solemnly something we almost catch, the wind whisking the words from us and the sand blinding, and the Western-Gothic castle slowly swallows them, all dunes and sheets of glaring sunlight.
Email Post