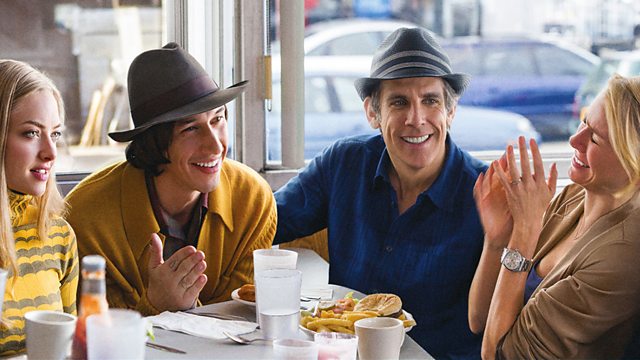 A movie about couples, kiddo, perfect for your birthday! is what I told my wife. With Ben Stiller, he's hilarious, and Naomi Watts, a real trooper up for anything—and that new oddball-cutie-pie, Adam Driver, and that young actor, I can't remember her name, big eyes, wide smile.

I noticed on the way into the theater that it was written and directed by Noah Baumbach. Hmmm. The Squid and the Whale was rough—but he's worked with Wes Anderson, so there's some light—and also Frances Ha—sad but humane.

We were safe for a while: heading over the hump between early and middle adulthood, Stiller and Watts meet hipsters, fedora'd and footloose, rambling in a world just out of reach of the younger couple—but the older couple holds out their hands, and they're pulled back—losing touch with much of what they had—which wasn't all that much, probably helped them decide to tumble back into some awkward version of their 20s.

Then darkness falls. The hipsters are hollow and amiably ruthless in their ambitions—and Stiller's character resents it, in part because he sees the gaps in his own 20s, his own lack of ambition, his principles masking his doubts. This Freaky Friday without the mumbojumbo quickly descends into panic, outrage, and some version of looking-in-the-mirror terror. I felt it, I'll admit, the sense of missed opportunities, the doubts, the nagging sense that it's not the young turks who are deluded, it's me, self-deluded and faking it, always secretly believing I'm the coolest guy in the room—but a Trivial Pursuit version of cool, not cars and clothes and toys but endless piles of nerd-wisdom and Google-level info about everything I've archived in my world and head—so an archive no one else really wants to rummage through—but I babble on with so many did-you-knows that I become the Dribble Glass version of a conversationalist: tip it up to drink it down—and ruin your shirt.

The movie hurt harder and harder as the minutes went by, until by the end I knew I wouldn't tell Jane anything about the sick feeling that I continue to push down down down, relieved only by the knowledge that I don't own a fucking fedora.