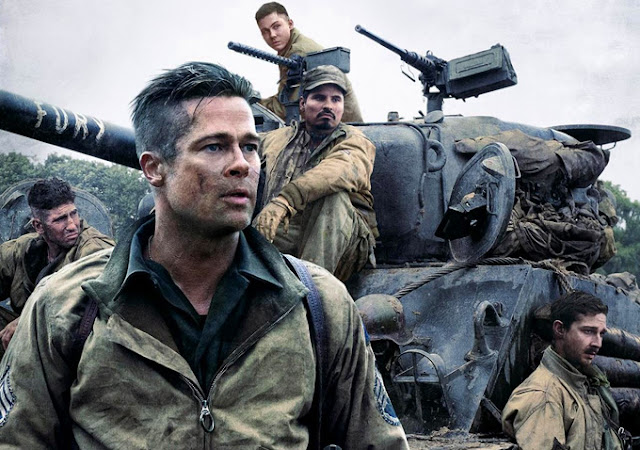 Someone said somewhere that the great war movies are anti-war movies. The list runs through my head, and that seems about right, all the way back to J'Accuse! in 1919 and All Quiet on the Western Front in 1930, and every Sam Fuller war picture, also Paths of Glory, The Deer Hunter, even Saving Private Ryan. But there's another thread, barbed and bloody, one that Fury follows: the memorial, the apologetics, the eye that tries not to blink. These movies want to show war as it is—of course failing, as they must. (Wasn't it D-Day survivor Fuller who said that the only way to make a realistic war movie would be to have a Marine sharpshooter fire live rounds at the audience?) But in the effort to give us fact, the fact that war is an interruption of history (as Gandhi says somewhere) steps forward and insists to be heard above the roar of the cannons—or the tank fire, which in Fury is a terrible swift sword tearing off heads and etc. in sudden, well, fury.

But when your history is interrupted and you end up in the blunt nose of a hunched-shoulder dinky Sherman, what's left to hold onto, except busted-up innards—mechanical and otherwise—cranky handles and pedals, all in a hard hot seat you can barely keep yourself planted on. But they did find something to hold onto—and sure it's each other, in dogged determination, hardassed good humor, near-psychotic rage, Evangelical grunts and tears, and innocence worn away like the seat of their torn pants. But in the end, it's the damn tank, and the things it can and can't do. "Best job I ever had," "Wardaddy" insists, and they all follow suit, their grins straight razors, their eyes shiny frozen dimes. In that assertion, the grand stupidity of war, and the rotted garbage it always reduces courage and loyalty to splits open and spills me like a sole survivor to hide under Fury and wait vainly to be relieved of duty.