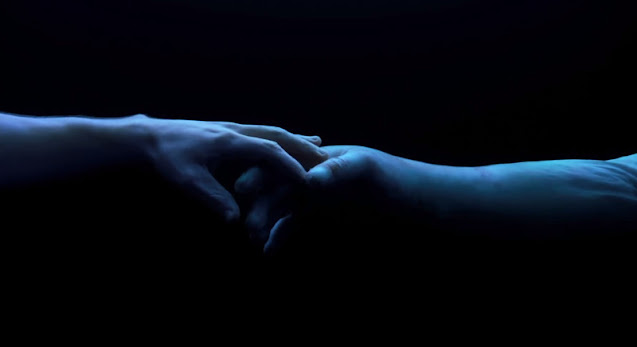 I am far removed from the front lines of the new/emerging sexual revolution, in which sex is finally only what it's always been, what it felt like (in all our nooks and crannies, but especially in our heads) way before we decided to make promises and seek permanence. This revolution is Darwinian in its desire to gather resources, however fleeting—but it is absurdist in its conclusions, wrenched free of the grip of survival and the steady hand of what Freud, that old softie, called "the instinct to preserve living substance and to join it into ever larger units." No, we're not building civilizations any more; we've said goodbye to all that.

But the pull of survival will not be denied, at least not at the movies, where desire is punished, and sex still = death—or some kind of erasure, or a subsuming into a substance not unlike the rubbery tar surface on which Scarlett Johansson walks backward, encouraging with her body the men who slowly sink into foggy blackness, the tar softening as they walk—while she nimbly steps along—until they sink and are—what? Eaten? Transformed? It's too menacing, maybe, for it to be anything else but consumption—and for a long while that's the gothic fear the movie preys upon, as Johansson draws toward her those hapless pickups.

All the while, though, she's gorgeously present, more beautiful than Hollywood ever asked her to be: all of her exposed and marked by the reality of living—not gauzed into pinup lusciousness but casual as a hand scooping up berries from a stone bowl 20,000 years ago, the need for sustenance joined with the need to be sustained. That's true at least for fleeting moments in Under the Skin, until the melancholy horror of appetite dashes the bowl to the ground—and brutal fire, that first building block of the "ever larger units," immolates any revolution that might have been.