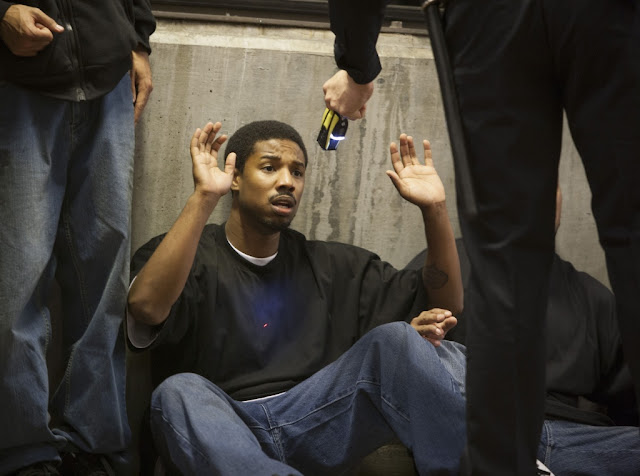 Watching Fruitvale Station, at first all I could think of were some Springsteen lyrics:

There's a nice break: His saint in the city makes it topside and feels the street's heart beat, and checks out those South Side sisters who sure look pretty. But Oscar Grant is not so lucky down there in the still-kinda-white BART station—where in a movie career far far away George Lucas shot the final chase in THX1138, his all-white runner making it past the faceless cops whose handlers decide it simply isn't worth the expense to gun down just another "prince of the paupers"—no, Grant is definitely not all-white, and even New Year's Eve doesn't rate a cease-fire. Shoot him in the back so you don't have to see the whites of his eyes.

Sure, they fired the cops and put the fumbling shooter in prison for about a year. But before all that, the movie watches Grant the day-of and makes us want to see him alive, living, just another kid trying to keep everything cool and not get hit up by the heat.

How many last days have the movies shown us, from Edmond O'Brien D.O.A. in frame one, to Burt Lancaster in The Killers trying to find a quiet place to die, to Henry Hill making Goodfellas cutlets out of his life and dumping guns beneath the maybe-watchful gaze of helicopters, all the way back to Charles Foster Kane thundering and preening and tumbling into a broken snowglobe? But Grant's last day threatens to hold me down and know how it feels—and lucky me: I can climb up outta that hole and once more leave the movies—also a limited experience, a small place for me to hide until the ushers start sweeping up after those kids who can still struggle to their feet.
Email Post